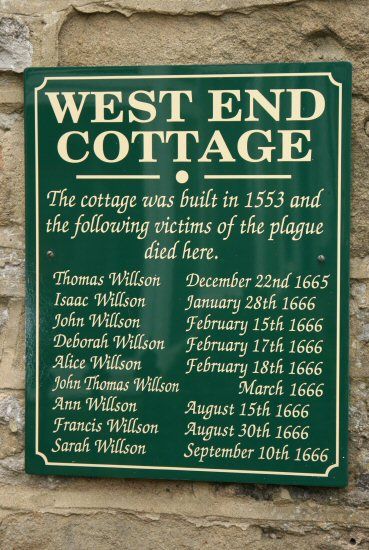 This Cottage was built in 1553’and the following victims

of the plague died here

In the village of Eyam, in the Derbyshire Peak District of England during the month of August 1667, Elizabeth Hancock lost her six children and her husband. Covering her mouth with a handkerchief against the stench of decay, she dragged their bodies to a nearby field and buried them. That tragedy was repeated for many of the families in the village

They were victims of the deadly Bubonic Plague, often called the Black Death, that ravaged Europe between the 13th and 17th Centuries, killing an estimated 150 million people. Between 1664 to 1666 some 100,000 people, one quarter of the city’s population, died in London alone. The plague, which at that point, had largely been confined to south-eastern England, was carried to the northern village in the summer of 1665 in samples of flea-infested cloth sent from London to the village tailor.

The local tailor who received the cloth was called Alexander Hadfield. Within a week, Hadfield’s assistant, George Vickers, had died a prolonged and agonising death. Before long, the rest of the household had fallen ill and died.

In the carnage of death that was taking place around them, the village community, led by the Minister of the Anglican church, William Mompesson, decided to make what has been described as ‘one of the most heroic acts of self-sacrifice in British history’. This sacrifice is credited with being one of the main reasons the plague’s march was halted in England.

What was this sacrifice? It was that they realised that, if they left the village, they would be carriers of the plague to other parts of northern England so they decided that the whole village would go into voluntary quarantine. The villagers established a system of boundary stones around the village, boring holes into the rocks and leaving coins in them. Merchants from surrounding villages would collect the money and leave bundles of meat, grains and other needed items in return.

This story would seem to have many similarities, but also significant dissimilarities, with events we are currently experiencing.

About two years ago, with some family members, I visited the village of Eyam. It was a very moving experience, especially as I read the plaques on the walls of the houses listing the names of those who had died there (the text of one of which is at the head of this article). Recent events in Australia caused me to consider the contrast in the attitude and behaviour of the villagers of Eyam as they faced a murderous disease that had a mortality rate of 70% and without any significant medical resources, with the response it would seem of many in Australia, with all its high tech pharmaceuticals and highly resourced health system as it faces the current Corona virus epidemic. A disease in Australia with (at the time of writing) barely more than a 1% mortality rate.

The villagers of Eyam faced an overwhelming existential threat, against which they had no real defence, not with concern for themselves, but with a preparedness to make an extreme sacrifice, which for many involved their own death and the death of their children, in order to save others. Contrast this with what we see today, utter selfishness, an all-about-me self-centredness often manifesting in hoarding of goods, physical fights, as well as abuse of staff, in supermarkets over toilet rolls, rice and other items, ALL of which are in plentiful supply in Australia. These behaviours continue as I write.

Why this stark difference in response to an epidemic? I want to suggest at least part of the answer, which will I am sure be unpopular with some, which is that the current behaviours are symptoms of ‘Another Virus’, a cultural and spiritual one, that has brought about the moral disintegration that has taken place in the West over the last 100 years.

At the time of the Eyam tragedy, England was a Christian country. That of course did not mean everybody was perfect, far from it, anymore than Christians are today. However, it did mean that pretty much everyone went to church on Sunday where they regularly heard, and so their minds and values were shaped by, Jesus’ teaching. Here are a few relevant examples of that teaching.

‘Love your neighbour as yourself’

Greater love has no man than this, that a man lay down his life for his friends’

‘Love one another as I have loved you’

And one from the Apostle Paul

‘Let each of you look not only to their own interests, But also to the interests of others’

Those are the other person-centred values that shaped the lives of the people of Eyam nearly 400 years ago. In the face of great personal danger, they did not think of themselves and selfishly fight over resources and so rob those who needed them, as we are seeing in the supermarket aisles. In contrast, they made the greatest sacrifice of love, in that they laid down their lives for the sake of their fellow citizens.

The result of the sacrifice of the people of Eyam so long ago was that 267 of the village’s population of about 344 died of the plague, an approximate mortality rate of 80%.

First, what does this comparison of attitudes say about our society?

Second, how much would this mindset of the villagers of Eyam, today so deliberately rejected along  with its Biblical value base, if restored, change our society and in what way?

Third. The Corona Virus epidemic will eventually pass away. The Spiritual Virus underlying the ‘it’s-all-about-me’ appalling behaviours currently being observed, unless addressed, will not.