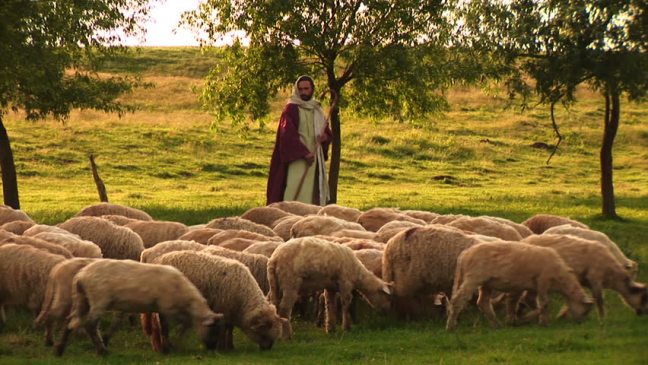 ‘My sheep listen to my voice; I know them, and they follow me.

I give them eternal life, and they shall never perish;

If one were to compose a list of the top ten Bible readings and songs chosen for funerals, an ever-present in the top three would be Psalm 23 or some song version of it (e.g. ‘The Lord’s My Shepherd’ or the ‘King of Love My Shepherd Is’).

This is not totally surprising because funerals as well as usually celebrating a person’s life will also contain elements of pain, loss, sadness, grief etc. In some cases, the loss of a person can bring a sense of threat, of loneliness, loss of companionship, insecurity, anxiety, of loss of income, these being felt as threats to the wellbeing of a bereaved partner, family member or friend.

Such ‘threats’ are the experience of many during the current Covid-19 crisis, and it is in such times that Psalm 23 is particularly relevant. This is because, despite its popularity at funerals, it is more about the journey through the ‘Black Times’ encountered along life’s capricious pathway than it is about death.

It is actually in response to situations of fear and threat to wellbeing that Psalm 23 speaks, for the writer King David knew all about such experiences, a number of which he encountered many times in his life. For example when he was being hunted by his predecessor King Saul who wanted to kill him, or by his own son Absalom ( 2 Samuel 13-18) who was seeking to, and for a while did, depose his father as King.

The Psalm is another in a category of what I call ‘Songs for the Black Times’ and is an expression of David’s ‘Confidence’ that, no-matter what happens in life the ‘God who is Love’ (1 John 4:8), was his constant companion. This confidence belongs to those who put their hand in the hand of God for the journey of life, for they can know that whether their journey takes them through the ‘Slough of Despond’, onto Misery Mountain, into the Dungeon of Despair or the Dark Wood of Pain, through the Mire of Loneliness, plunging into ‘Black Dog’ Pit, or into the ‘Valley of Darkness’ they have a constant companion whose Name is Love.

David uses the imagery of a Shepherd looking after his flock. This is not the type of shepherd we think of in the West, certainly not in Australia. Shepherds of David’s day (as in Jesus) actually lived with their flock, night and day. They had a very personal relationship with their sheep, knowing each one by name, and they didn’t need to be rounded up by a sheep dog or a shepherd on a motor bike, but would follow the shepherd wherever he went.

David knows that his Shepherd always has his best interests at heart and, as the shepherds of that time did for their flock, would lead him to where his needs would be met, to where there were ‘Green Pastures’, always the desire of sheep. The still or ‘Quiet Waters’ (literally ‘waters of placidity’ – v.2), which carry the sense of a place of ‘Rest’, the goal of the Israelites in their wilderness wanderings, with its ultimate fulfilment in the offer and promise of Jesus when he said ‘Come to me all who are weary and burdened, and I will give you rest’ (Matt. 11:29). In that, the ‘Good Shepherd promises to refresh his soul, the very core of his life, even when dispirited and wearied, even when cloaked in the black fog of despair.

In Psalm 23 David expresses confidence in many of God’s promises, including that He will be his navigator, as he is ours. Even when we are lost in the ‘Darkest Valley, in a fog of directionless confusion, the promise is that He will lead us on the right path – v.3. Jesus promised that guidance through the Holy Spirit whom he would send to his followers.

Many would consider the most extreme threat is when we are facing death. However, David is confident that even when he has to journey, as we all must, through the ‘Darkest Valley’, God is with him to strengthen him to face the Grim Reaper (Rod and Staff are symbols of Kingly strength and the word ‘Comfort’ has its old meaning ‘to strengthen’).

Further, David knows, as can all those whom Jesus has saved, that his destiny is guaranteed, and that God will lead him into the sunlit pastures of the heavenly uplands. There he will be received as an honoured guest at the great heavenly banquet that the Jews anticipated, and which was reflected in Jesus parable of the ‘Great Banquet’. (Luke 14:15-24)

No matter even in the poetically expressed ‘Death’s Dark Vale’ of the famous hymn, the Psalm assures God’s sheep that His Goodness and Love follow us ALL the days of our life no matter where we are on life’s journey

This beloved Psalm is NOT a promise of a pain, suffering, difficulty-free life. It does however, give the ultimate promise that no matter what happens on the journey of life, no matter what we are experiencing today, the good, the bad or even the evil, we have a Great Shepherd who will ultimately lead us into that place of ‘Many rooms’ (John 14:6), to the sunlit ‘Green Pastures’ of the fruit of the ‘Trees of Life’ that satisfy all needs, and to drink from the ‘Waters of Placidity’ that flow from the very throne of God (Revelation 22:1-5).

The ‘Shepherd’s Psalm’, written out of the lived experience of King David, is the assurance that even in the ‘Black Times’ such as are being currently experienced by many we have a constant companion-

Indeed, we are ‘Followed by Love’