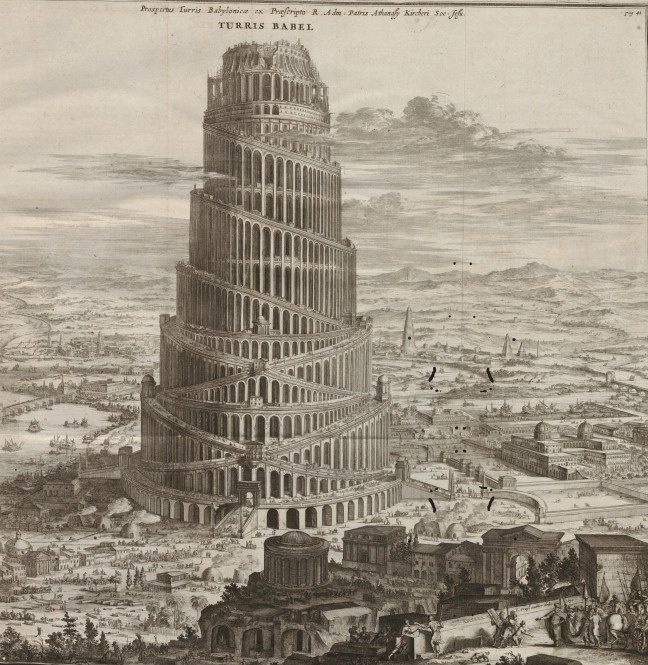 The Marquis De Sade in a conversation about God with the French Emperor Napoleon is reputed to have said ‘I have no need of that Hypothesis’. No doubt he would feel very much at home in our society in which most now live their lives, and certainly how the community organizes itself, with a similar philosophy.

The Old Testament gives a multitude of examples of, and warnings about, God’s response to such an attitude. One of these that I think particularly plays into the Australian context of today is the ‘Tower of Babel’ story in Genesis 11:1-9.

The Tower of Babel story pictures a united humanity where the ‘Whole world had one language and a common speech’ and worked well in cooperation with each other to achieve significant  things. The problem from God’s perspective however, was not their great capacity to work together, but more importantly what they worked on, and for whom.

We are told that they were a people who had advanced in their technological ability (by their standards anyway) and could achieve great things; they were very proud of their capabilities; they had built a great tower (like a Babylonian Ziggurat) as a fort, which they thought would make them secure. It was a tower also that ‘reaches to the heavens’ where, in the thinking of the time, the ‘gods’ were believed to live, so from God’s perspective they were making themselves equal to Him.

In short, here was a society that effectively had decided that they had ‘no need of the God Hypothesis’  and considered themselves to be secure in their own abilities. However, God had another view. He could see that-

“If as one people speaking the same language, they have begun to do this,

then nothing they plan to do will be impossible for them.”

By which, knowing their pride in regard to their abilities and their self-dependency rather than God-dependency, God meant that there was no limit to the evil they could do. So God came up with a brilliant strategy, one designed to produce a dysfunctional society. He scattered them into groups/tribes and gave each group a different language so they couldn’t communicate very well with each other.

“Come, let us go down and confuse their language so they will not

The result was to turn a highly functional society into a highly dysfunctional one. Brilliant!

And haven’t we learned that lesson well!

What we see in the Western, post-Christian, world is the intentional Tribalization of society. One of the main drivers of this process goes under the name of ‘Identity Politics’, the most marked characteristic of which is the division of society into Tribes defined by people’s skin colour, gender, sexual orientation, ethnicity etc.  Not only that but worse, people are valued according whichever Tribe they are pigeonholed in.

We also currently see another tendency to Tribalize on a national level, one that has been increasingly evident during the Covid 19 Crisis. In what was supposed, at its founding, to be a Commonwealth (meaning Wealth held in Common) of Australian States has been reduced to a loose federation where state Premiers act to tie wealth and resources to their State, effectively their Tribe.

So, we get tribal statements like ‘Queensland Hospitals are for Queensland people’, or when a particular area in one State is in special need of extra vaccine other states will not help out with some of their supplies. This even though supplies of the vaccine are bought by the Federal Government and so are indeed part of the ‘Common-Wealth’. The states it would appear have become Tribes.

All of this is the very antithesis of God’s intention for human society, which is, and the reason for which Jesus came into our world, to ‘create in himself One New Humanity’ (Ephesians 2:15). That is a society not ‘Identified’ into Tribes according to skin colour etc. but a society of which Dr Martin Luther-King ‘dreamed’, one where his children would-

but by their character’

The ‘Value’ of a person does not reside in their gender, race, sexual orientation, skin colour etc. but rather in the in fact that every human is created in the ‘Imago Dei’, the Image of God (Genesis 1:26). It is this, immutable and essential characteristic that gives every person equal value in the sight of God, and refutes the notion of value based on ‘Tribal Identity’ which amounts to an Orwellian ‘Some people are more equal than others’ mindset.

There can be nothing more contrary to God’s purpose and vision for human community than the ’Identity Politics’ philosophy now rampant in the institutions of society; a philosophy that produces a society where Luther-King’s Dream is shattered into a nightmare; one from which there is no sign of a ‘great awakening’ any time soon. Such a nightmare is the inevitable result of a society such as ours that has decided it ‘has no need of the God Hypothesis’.

Recent history gives no reason to expect that our politicians, or our education system, will lead us out of our journey towards dysfunction, for both of these are now largely a product of the same ‘Identification’ environment. Tragically, nor are we are likely to see the current Church produce new directions out of the ‘nightmare’, as it sleepwalks towards the ever-closing Iceberg of societal irrelevancy.

Indeed, rather than being the solution to the descent into dysfunction the reality is the opposite. For it is the case that, in the words that C.S Lewis put into the mouth of Screwtape (Satan’s chief demon) 70 years ago–

“Our greatest ally is the church, not the one spread out through time and space, terrible as army with banners, but the church building on the corner, the club that goes through confusing rituals, having forgotten that it exists to build God’s Kingdom”

A symptom of this amnesia was encapsulated by the great evangelist D.L. Moody who in speaking to his congregation said-

“How many are there in the church today, who have been members for fifteen or twenty years, but have never done a solitary thing for Jesus Christ? . . . .  they cannot point today to one single person who has ever been lifted up (to heaven) by them.”

These words were spoken 100 years ago, but what has substantively changed?

So if we can’t look to the political class, the educational class, the institutional Church and a large proportion of its members to lead us out of the nightmare, what will be God’s ‘One New Humanity’ vehicle that will work to reverse the trajectory of society fragmenting into warring tribes?

Both the Church and society face a Crisis, such a Crisis requires a Crisis response of wartime proportions, although visit pretty much any Sunday church service and you wouldn’t get any sense of it.

The only way out of the nightmare is for Christians to ‘unbind’ and unshackle themselves from the resource-consuming, missionally failed, Sunday-Centric behemoth. This means to become pro-active and FULLY engaged in bringing God’s Kingdom values to bear on every aspect of their lives and of society; to challenge ‘Babel Think’; to challenge the cancer of ‘Identification’ (Tribalization) wherever we find it. This means acting as the SALT Jesus says Christians by definition already are, remembering His warning that Salt that has lost its saltiness is only fit the be thrown away (Matthew 5:13).

There needs to be a replacement of the current thinking of the majority of congregational members and their leaders who continue with the ‘go along to church on Sundays and maybe to a Home Group’ mindset. So doing keeps the Gospel Salt in the Saltshaker of the Sunday-centric model, where it does little Kingdom good.

The Tower of Babel story illustrates, among other things, a highly effective strategy for producing a dysfunctional society. If that is what we want, that is to accept a continuation of our descent into a fragmenting dysfunctional mosaic of Tribes (identities), then I guess we just keep on keeping on ‘going to church’.

Alternatively, we could recapture God’s purpose for Christians to be ‘Salt’, that is to engage in the ‘Saltiness Project’ and be devoted and passionate vehicles for the bringing about of his ‘One new Humanity’ in Christ.